Home > Events > Official visits > Speech by the French President during the Summit on the Global Pact for the (...)

President Emmanuel Macron delivered a speech during the international launch summit of the "Global Pact for the Environment", which took place during the 72nd United Nations General Assembly. 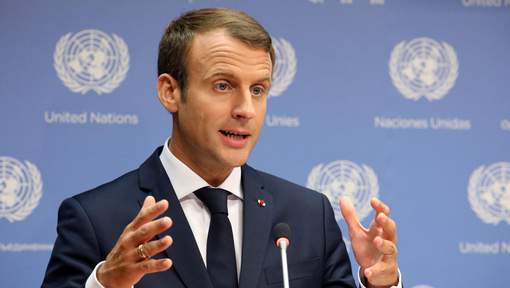 "Thank you very much for being here today.

I want to thank the United Nations Secretary-General for being here and for hosting us at this place, and to thank each and every one of you for being here today for the summit to launch the Global Pact for the Environment.

Indeed, I’m very pleased to see you alongside the Secretary-General and the President of the General Assembly, and surrounded by so many figures from all over the world in an effort to, in a way, make up for lost time.

We can never totally catch up, because this initiative should have been taken a long time ago, but I think that with determination, organization, inspiration and willpower we can do a great deal.

Over several years, several decades, before and after the Earth Summit of 1992, protecting nature has gradually become a daily battle for the UN and all its agencies. And this battle has been fought with difficulty, sometimes painfully, but with passion and determination in every field, be it climate change, biodiversity, the fight against deforestation and desertification, the fight against trafficking in endangered species, measures to tackle air, water and soil pollution, or the safeguarding of the oceans and polar regions.

All these battles have given rise to statements, conventions and protocols which are the result of years and years and scientific research, curiosity, cooperation and activism, but also suffering, the degradation of natural resources, and outrageous plundering and waste.

All that legislation, all those joint efforts merit the adoption of a single, universal framework. And I have to say this is what’s brought us together in this hall today. A framework that will promote at the highest level peoples’ and governments’ ambitions for protecting the planet. A framework that will establish rights, but also duties for mankind as regards nature and therefore as regards itself. This collective framework is the Global Pact for the Environment.

I want to thank the many international, European and French experts who have worked for months to put together this draft. Laurent Fabius will explain to us in a moment how the principles [of] and proposals for articles in the pact were laid down, and the draft is a magnificent basis for work on which – we hope, at any rate I very much hope – the United Nations General Assembly will be able to speak out, in coordination with the UNDP, on the issue of common interests, in order subsequently to have a proactive agenda.

This draft is a challenge posed to us all: to build, in a way, the law which the epoch we’ve entered – the anthropocene epoch – needs. This law doesn’t exist today, and that’s the purpose of the appeal we’re making today to adopt this Global Pact for the Environment.

We must follow our consciences and radically overhaul the paradigms of our shared lives on this planet, and to this end we must forge ideas, notions and rules enabling us to lay the foundations of this new commitment.

We all know that the degradation of the environment is already causing hundreds of thousands of deaths – millions according to some calculations – due to global warming and air pollution. And those most affected are always the most vulnerable people in the most vulnerable countries: children, elderly people and women, particularly pregnant women, and unless it’s slowed down this change will cause the disappearance of entire territories. It will accentuate water wars, famines, the exhaustion of natural resources, exoduses and therefore all the geopolitical turmoil issues of which we’re perfectly aware and of which, much too often, we deal only with the ultimate consequences without tackling the root causes.

These disasters will be worse tomorrow if we do nothing – even though many opportunities and developments are possible – and if we don’t decide to act now.

With the law, with this Global Pact for the Environment, we’ve got to go further in transforming our societies and taking resolute action. The United Nations is the appropriate forum for building this Global Pact for the Environment together. Let’s draw on the success of Agenda 2030, which, with the Paris Agreement, is our common road map for transforming the world. And by strengthening international environmental law, in furtherance of the Sustainable Development Goals, and thus making it easier to implement the environmental pillar of sustainable development, the pact will be a tool for all states for implementing Agenda 2030.

To negotiate it, we already have founding principles and solid foundations, such as the 1972 Stockholm Declaration and that of Rio in 1992 and 2012, international global and sectoral agreements on climate, biodiversity, the fight against desertification, waste and chemical products; and all these instruments serve as a legal arsenal which will allow us to bring together in a single, binding text the various elements making up international environmental law, adding to them ambitiously against the yardstick of the major challenge posed by the environmental crisis.

I very strongly believe that the world is ready for this and that it’s our responsibility; and rather than spend too much time wondering whether we should reopen issues we’ve already closed, or decisions we’ve already taken, we’ve instead got to forge ahead and build the next step. This Global Pact for the Environment is the next step.

So I’d like us to have fruitful, effective discussions today and conclude a “battle plan”, if you’ll allow me to use that expression, which I don’t mean to sound aggressive, but which seeks pragmatism on this issue.

I’m immediately going to hand over to Miroslav Lajčák, the President of the United Nations General Assembly."