Prof. Patrick Kinney
Director of the Climate and Health Program in the Department of Environmental Health Sciences at the Mailman School of Public Health of Columbia University

This event has focused on the impact of climate change on water and health. For both physical and socio-economic reasons, tropical regions are among those most sensitive to the impacts of climate change. At the same time, model projections are less certain for the inter-tropical zone than for many other regions. This is especially true regarding the water cycle components that are the key drivers for agriculture and food security with further implications for the health sector (health impacts of food insecurity can be severe in regions already facing nutritional deficits). Changing patterns of temperature and precipitation can augment existing health risks due to water-borne and animal and human vector-borne diseases.

According to WHO, climate change will exacerbate health challenges for more vulnerable populations, causing an additional 250,000 deaths per year between 2030 and 2050. Health and poverty are strongly linked as the poorest people tend to suffer more from illness and die earlier than those with greater wealth. Moreover, since environmental factors play a role in more than 80 % of major diseases and injuries in the world and impact animal and human health, climate change will increase pressure on an already over-burdened health sector.

While climate change researchers face the specific challenge of improving regional climate models,especially for the tropics, the scientific community at large is looking for new and integrated approaches needed to understand how the Earth system will evolve in a warmer future and how this will impact human activities. . The One Health approach is an example of such relevant innovative effort which brings together scientists and policy-makers from different sectors. At the same time, the fight against poverty faces new challenges. There is increasing evidence that climate-related disasters linked to environmentally unfriendly development policies have an inequitable impact on ecosystems and populations.

This event has featured stimulating keynote presentations by four researchers followed by open discussions, and provided a forum to explore new, evidence-based pathways for implementing ambitious public policies to adapt to and mitigate the impacts of climate change both for people and ecosystems.


Conferences 934 is a series of monthly conferences organized by the Consulate General of France that brings leading experts who share their analyses on international issues..
More information: http://www.consulfrance-newyork.org or on 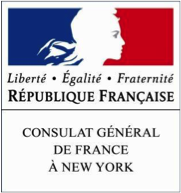